By shahnon April 20, 2015
About a month ago, I was interviewed via email by Malay Mail Online (see the lines in bold below) wanting a little insight into the present state of the opposition bloc, Pakatan Rakyat. It was based on a recent Facebook survey by Politweet which pointed out that "support" for Pakatan "appears" to be on the decline. So I gave my two cents as below. Note that this was the political mood a few weeks before the implementation of GST (Goods and Services Tax). I doubt I would be saying the same thing today.

KUALA LUMPUR, March 19 — Malaysians are increasingly becoming disenchanted and tired of Pakatan Rakyat (PR) because they seem to have made little headway since the 13th general elections, political observers noted.
Social media analyst PoliTweet.org pointed out that interest in the federal opposition coalition on Facebook has reached an all-time low since June 2013, which observers said might have been caused by political fatigue.
“There is a kind of cooling point of interest among the members of the public. In the wake of the 2013 election, there is a sense of disappointment among some people supportive of the opposition because they didn’t win,” said Ibrahim Suffian of independent pollster Merdeka Center.
“By 2014, it descended into chaos as the parties went into internal election mode, and subsequently, the Selangor crisis… the opposition was in disarray.”
The study by PoliTweet.org showed that Facebook interest in PR was only at 10.26 per cent in March this year, compared to its peak at 41 per cent in August 2013.
PR denied Barisan Nasional (BN) a two-thirds parliamentary majority in the 13th general election and won the popular vote at 51 per cent, despite BN retaining federal power.
Since then, however, the opposition pact has been plagued by divisive issues, including the Selangor mentri besar crisis last year triggered by PKR and DAP’s push for local government elections.
The latest crisis came as Kelantan PAS passed an amendment to its controversial Islamic penal code of hudud, prompting DAP to once again reconsider its alliance in PR.
“This certainly reflected the decline in public interest and the feeling of disappointment among young workers and the Twitter-going people,” offered Ibrahim.
Shahnon Mohamed Salleh, a lecturer at the Faculty of Communication and Media Studies, Universiti Teknologi Mara, suggested that the public are tired of witnessing politicians fighting among themselves, while offering little or no solid solutions to real issues or problems that affect the public.
“The decline in interest towards Pakatan is understandable, logical and expected,” said Shahnon, whose research focuses on social media and political communications, in a brief email interview.
“In a way, it is a reflection of the deep cracks and disunity among the three Pakatan partners especially between PAS and DAP.”
Local political commentator Ezra Zaid, however, suggested that the waning interest does not reflect real support of PR, insisting that the Internet-savvy public has always maintained their interest in political issues.
“The opposition has been using social media much longer, since the 2008 general elections. By using that platform for much longer, it has perhaps reached its plateau,” Ezra said, comparing PR to BN that only started its social media push prior to 2013.
“You have a very savvy social media user in the youth minister as well. That has played a part in at least getting BN voters on board these platforms and engaging on that front,” he added, referring to the Youth and Sports Minister Khairy Jamaluddin.
In comparison to PR, interest in BN on Facebook has risen from 23 per cent in August 2013 to around 33.33 per cent in March this year.
Despite the numbers, Ibrahim highlighted that political interest might be cyclical, and it is not impossible that PR might see the public’s interest and support return in the next general elections.
“This thing is cyclical, it is a dynamic situation. Things ebb and flow. There was feverish political activism leading up to the 13th general elections, and expectedly people also became tired after they failed to capture Putrajaya,” said Ibrahim.
- See more at: http://www.themalaymailonline.com/malaysia/article/waning-interest-in-pakatan-on-facebook-a-sign-of-disenchantment-observers-s#sthash.FUG8e9sv.dpuf 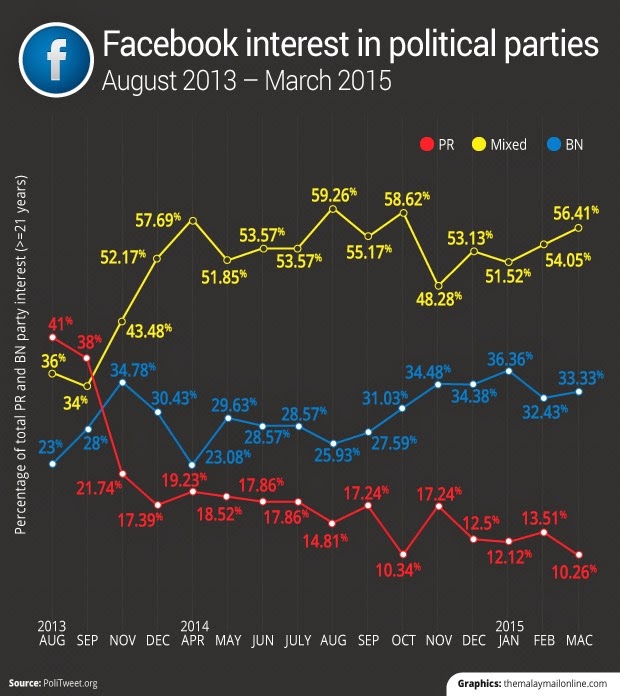 This was the second time, I think, that I had the chance to visit Tun Dr Mahathir's Hari Raya open house. The first was the SAHOCA Raya gathering few years ago (mom is an alumni of Sultan Abdul Hamid college). The Mines Resort was nice but I think the food wasn't really that great even though it was prepared by Palace of the Golden Horses hotel, mind you. I didn't had the chance to snap Tun's picture as there were just too many people, so I just shooked his hand, wished Selamat Hari Raya and walked towards the dining hall. I really admire Tun's strength sitting there for hours (open house is from 10am - 1pm, 2.30 - 5pm) to shake hands with his visitors and repeating "Selamat Hari Raya, terima kasih.." for over thousands of time. He should've just put a tape recorder next to him, instead. hehe. Some of the VIP and other notable guest that I met there were, Foreign Minister, Dato Rais Yatim and wife, ex-Minister, Aziz Shamsuddin, former NST Group Edi
Read more

I kick-started the new year by attending Azidi Ameran and Shalin Zulkifli's wedding reception at Shah Alam today. Azidi's mother is mom's former colleague in a local uni, so that's how we got the invitation. Here are some pictures. :) wedding reception at Azidi's house in Shah Alam silat performance before the bride and groom Ayam masywi or "ayam golek". Our local version of Kenny Rogers Roasters Related news - The Star: Shalin seals 14-year relationship with Azidi
Read more

..Coldplay used the Liberty Leading the People (French: La Liberté guidant le peuple ) painting by Eugène Delacroix in commemorating the French Revolution, as their cover album. Here's another much awaited new release by one of UK's best band, Coldplay ! According to Wikipedia, the new album is due to be released worldwide on 16th June. But as usual, you can always find it on Torrent sites first. (Viva la Vida.mp3 download link below) Some interesting trivia of Viva La Vida according to Shahnon.com ; 1. A lot of death related song titles, i.e. ' Death and All His Friends ', ' Cemeteries of London ' and ' 42 '. 2. The intro of ' Viva la Vida ' (my favorite song) sounds very much similar to Alizee's song, ' J'en Ai Marre ' and apparently the song, ' Viva la Vida ' is about the French Revolution (see chorus below) while Alizee (pronounced: "ah-lee-zay" ) is a hot French singer. (seriously:)) So there seems t
Read more

By Shahnon April 15, 2009
Today, I found out that one of my blog traffic came from The Edge . Curiously enough, I clicked on the link, and saw a commentary of the so-called post mortem of the recent tri-election, containing blog posts from around the local blogosphere. So, thanks to The Edge journalist, Lam Jian Wyn for quoting and mentioning this humble blog in your article; ' Tri-election post-mortem '. Written by Lam Jian Wyn Wednesday, 08 April 2009 15:30 The tri-election fever is gone, sort of. In the wake of the results – 2 to Pakatan, 1 to Barisan – are a slew of blogposts. While some bloggers were wasted from the election frenzy, the blogosphere’s pundits wasted no time in dissecting the results. BN’s defeat in the peninsula was clearly met by some with disbelief. A Voice was disappointed with the component parties of BN. “Much to my chagrin, the Chinese vote did not sway for BN. Did MCA or Gerakan failed to deliver for BN? Does it indicate MCA and Gerakan as being no more relevant to th
Read more

Presidential Election, Polls and the Pandemic

So it's less than 48 hours away to the US presidential election 2020. Trump or Biden? In a "normal" presidential election, pre-Trump era, a 10-point lead in a final poll is nothing but a foregone conclusion. Game over. Khalas. But to quote John Kasich, former Ohio Republican-governor-turned-Biden-supporter, "these are not normal times." Nobody is taking the polls as seriously as before, especially after what happened in 2016. The polls are no longer as reliable or as believable as they used to be. Joe Biden could very well win the popular vote but end up losing the electoral college, just like Hillary four years ago and Al Gore in 2000. But 2020 is not 2016 . The Covid19 pandemic has shattered America's "invincible" image and exposed the failure of Trump's leadership. I mean, how do you explain statements like, "I take full responsibility, but it's not my fault"? That is "fascinatingly" one of the most Trumpi
Read more

The UAE-Israel "peace deal" is officially the worst Arab-Israeli deal since the Egypt-Israel peace treaty 1979 and Oslo Accord 1992.  Despite Sheikh Mohamed bin Zayed and the UAE state media's best effort to frame the deal as an Israeli "compromise" - which is nothing but a big joke - the ground reality remains the same. Nothing changes. Israel has been and is still occupying West Bank and East Jerusalem since 1967. There is nothing "historic" or "breakthrough" in this deal as claimed by President Trump.  It's all status quo for Israel, and nothing for the Palestinians. #FreePalestine
Read more

..Fahmi Reza and Pak Mamat 'Cino' (I forgot his real name) at the 'Revolusi 48' film screening at The Annexe, Central Market. Apologize to fellow blog readers for the long hiatus (syok sendiri kejap). Anyway, last Friday night I had the chance to watch Fahmi Reza's ' Revolusi 48 ' film screened at The Annexe Gallery. Four Malayan revolutionary fighters were the VIPs (I can only remember Pak Mamat). The film was actually the first draft and according to director Fahmi Reza, the full film will be released somewhere in November. I feel it is a good film and I enjoy watching it. Reason being is because I think we are still lacking in producing films on historical events. I like the film, but not the philosophy and ideas. Revolusi 48 is not only an anti-British revolution, but it was in fact a pro Communist revolution, albeit a failed one. And this was obliquely referenced in 'Revolusi 48'. The Malayan revolution in 1948 was also an attempt to turn
Read more

By Shahnon September 07, 2012
Former Prime Minister Tun Dr Mahathir's recent comment saying that Malaysia "has no ideology" has generated a few debates and discussions on the Internet. Of course that statement is debatable. I can agree to some extent. You have to understand the context of his argument. I think what Dr Mahathir was trying to say is that the government does not subscribe to any fixed political ideology. Take for example the Communist China. In reality China is no longer a communist or socialist state, though they are often proud to claim theirs as "Chinese-style socialist". But in actuality it is pure capitalism. What separates them from the American capitalism is that in China it is a state-controlled economy, while in the US, private enterprise. Malaysia, on the other hand, though we have never officially or politically claimed ourselves to be a socialist state, key elements of socialism and populism existed in some of our economic structures and policies. As a matter
Read more