Showing posts from August, 2016
Show All

Who has the right to rule Malaya? 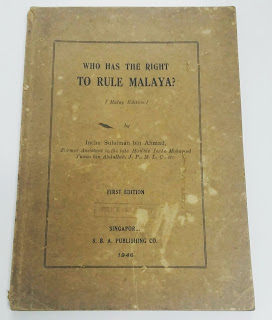 " Who has the right to rule Malaya? by Inche Sulaiman bin Ahmad (SBA Publishing, 1946)". This is the oldest book in my collection. A very important question indeed especially if you consider the historical context. 1946: It was a year after the end of the Second World War. It was a year after the Japanese lost WW2 and left a huge power vacuum in Malaya for a brief period of time, before the British returned. The pro-Communist MPAJA (Malayan Peoples' Anti-Japanese Army) took advantage of the situation well and they came out from their jungle bases to occupy many small cities - mostly in the small towns such as Kuala Pilah, Batu Pahat, Temerloh etc - across the Malay peninsular. So for two bloody weeks, Malaya was ruled by the pro-Communist MPAJA guerrila forces. I cannot imagine the kind of disaster had they been able to rule for two years or even two months! Their terroristic revenge tactics in persecuting former Japanese sympathisers, who were mostly Ma
Post a comment
Read more
More posts