US Politics 101 and Trump

Looks like the American political pendulum swings hard again this year. After 8 years (full term) of Bill Clinton (D) from 1992 to 2000, the pendulum swings to the right for another 8 years under George W Bush (R). The pendulum then swung left in 2008 when Barack Obama (D) won.

Apparently Hillary and the Democrats aren't strong enough to stop the political pendulum from swinging to the right this time. 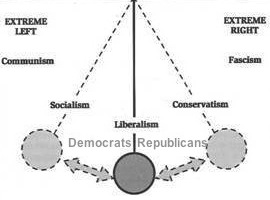