Showing posts from September, 2014
Show All

"From Sleeping Beauty to Puppet MB" 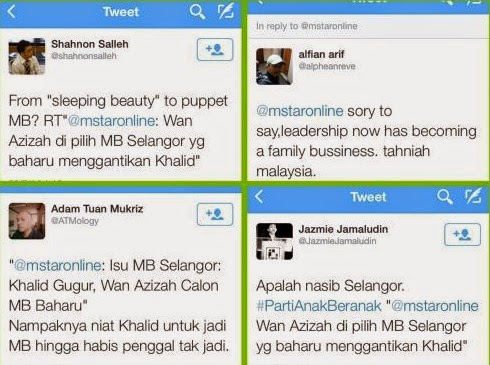 This is quite an old news actually (22 July), but the issue is still ongoing. Latest news is that Khalid has submitted his resignation letter to the Sultan but was requested to continue as the Mentri Besar until a replacement is found. Anyways, here is a tweet reply sent to mStar, an online Malay news portal, which was deemed good enough to be made headline. Thanks to my colleagues, Anita and Khai, for the alert.

So if anyone asks have you made any news headlines? I can now say yes. Ha ha.
Post a comment
Read more
More posts