Showing posts from December, 2009
Show All

Dr. Farish Noor - What Your Teacher Didn't Tell You 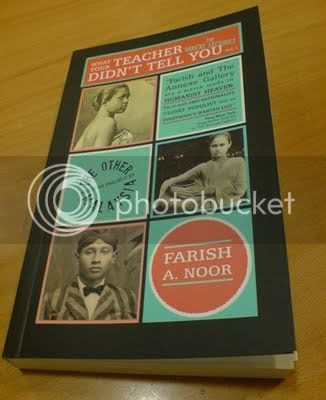 Ah, finally managed to get a copy of "What Your Teacher Didn't Tell You" by Malaysia's favourite political historian, Dr. Farish Noor. It is based on Dr. Farish's public lecture series at The Annexe, of which I am privileged to have attended one of them last year (Dr. Farish Noor and books).

Of all the chapters in the book, I am particularly interested in "Hang Tuah the Pacifist". Dr. Farish has brilliantly recreated Hikayat Hang Tuah into something new and exciting. I mean, anybody can read and understand the thick hikayat but not many can read and interpret the hikayat like how Dr. Farish did.

Frankly speaking, history would be so much interesting if we have people like Dr. Farish teaching the subject in schools.

Anyways, I have yet to read the whole book, but have only skimmed through few pages. Still, I am recommending the book for all of you.
Post a comment
Read more

By Shahnon December 16, 2009
A lot have been said and written about this subject since Prime Minister Najib Tun Razak assumed premiership in April 2009. But in reality, 1 Malaysia is not something new. We are in fact 1 Malaysia since Merdeka, or perhaps way before that.

What has happened since then?

In principle, there is absolutely nothing wrong with the 1Malaysia concept. I believe only insane citizens would want disharmony among themselves. But here comes the famous problem. Malaysians always have problems with policy enforcement or implementations. Whether or not 1 Malaysia will succeed, the outcome can only be seen in the next 5 to 10 years, or maybe even 20 years.

According to renowned historian, Prof. Khoo Kay Kim, race relations in Malaysia have gotten worse since the 1960s. The interesting question is, when was the turning point? When did we go astray?