Showing posts from 2012
Show All

By Shahnon September 07, 2012
Former Prime Minister Tun Dr Mahathir's recent comment saying that Malaysia "has no ideology" has generated a few debates and discussions on the Internet. Of course that statement is debatable. I can agree to some extent. You have to understand the context of his argument.

I think what Dr Mahathir was trying to say is that the government does not subscribe to any fixed political ideology. Take for example the Communist China. In reality China is no longer a communist or socialist state, though they are often proud to claim theirs as "Chinese-style socialist". But in actuality it is pure capitalism. What separates them from the American capitalism is that in China it is a state-controlled economy, while in the US, private enterprise.

Malaysia, on the other hand, though we have never officially or politically claimed ourselves to be a socialist state, key elements of socialism and populism existed in some of our economic structures and policies.

As a matter of f…
2 comments
Read more

How to Buy and Ship Books from Amazon to Malaysia

By Shahnon February 21, 2012
Today is kind of a happy day for me because I have finally figured out how to purchase books and stuff from Amazon.com! I know I'm a bit late on this. I always prefer to buy books "offline" but sometimes there are certain books, especially old and used ones, that you can't find it in any of the local bookstores. I've been meaning to buy cheap second hand books from Amazon.com for years but the problem is that Amazon doesn't ship books to Malaysia! But thanks to VpostAsia.com and comGateway.com for providing the solution!

How it works is that the moment you register with any of the two websites above, you'd automatically be given a US address (e.g. Portland, Oregon). So whatever books or stuff you buy from Amazon or any US-based online shopping site, it will be shipped to your US address first before Vpost or comGateway ships it off to your local address. Basically that's the theory.

I haven't tried making any purchase yet. But I have read a numb…
Post a comment
Read more 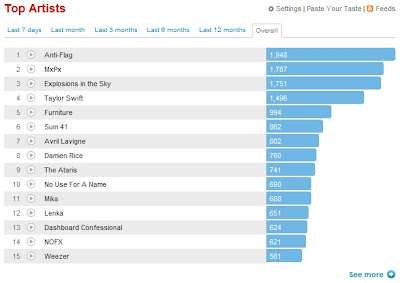 When I signed up to Last.fm 6 years ago I never thought that one day I would find it useful or at least something that I can blog about. So, thanks to Last.fm for keeping my music statistics for the past 6 years. Today's blog post is about my kind of music. I'm not so good in explaining about the kind of music that I listen to for the past decade or so. Some of my uni friends find it a bit odd that I can listen to songs from Siti Nurhaliza to punk rock. In attempting to answer myself, I think the reason lies in the fact that I'm not a fanatic of any genre, though I admit that while growing up, especially in my early 20s, I was heavily influenced by punk rock, emo (eg Dashboard Confessional, The Used, Taking Back Sunday, The Early November etc), indie rock (The Strokes, The Hives, The Postal Service and most other "The" bands), post-rock and a little bit of melodic hardcore (e.g. Alexisonfire and Atreyu).